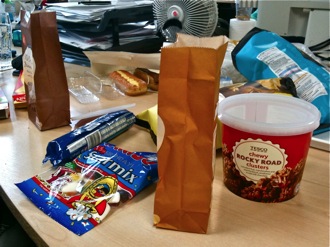 I’ve got a problem at work. Well, okay, I have several problems at work, including the irritating fact I have to go there every day. But the problem I want to share today is the Problem of the Spare Desk.

Since our team moved floors a couple of months ago, I’ve had to sit next to the aforementioned spare desk. If you’ve not sat next to a spare desk before, here’s a picture of what they look like most of the time. Because pretty much every day, someone has a birthday, or is holding a bake sale for charity, or just feels like cheering people up because it’s Monday. Or because it’s Friday. Or because there’s a vowel in the month, or whatever.

And these things are all celebrated with calorie-dense, vitamin-free foods, all of which get put on the spare desk, of course. Today it’s Dan’s birthday and here are his doughnuts, shortbread, crisps, Haribo, rocky road, cocktail sausages, Oreos, cream cakes, and so on.

And I’ve had to sit next to the bloody things all day. While carrying on bravely with my diet.

I don’t think I ended up too many calories up, despite caving in to temptation in the afternoon. I didn’t buy lunch today, swapping it for occasional sugar-based grazing from the empty desk. And then this evening I ran 4K down the towpath. Hopefully, as well as starting to re-form the habit of weekday running, the 523 calories RunKeeper says I burned should cancel out quite a few shortbread biscuits.

So, on the whole, I think I got away with it.

But the next time our office has a re-shuffle, remind me to bribe the floor-planner, will you? I think that spare desks should only be put next to those irritating skinny people who can eat fifteen doughnuts a day without putting on an ounce.

One thought on “Balancing Act”