I’ve taken some time off from running. About a year, in fact. I’m not sure why, really. I just didn’t really feel like it for a while. And it is, after all, voluntary.

I usually post a medal photo to celebrate, but sadly the Bristol 10K ran out of medals today. In fact, they ran out of medals, T‑shirts, goodie bags, and water at the finish line. So all us poor sloggers at the back got was a Mylar blanket for our troubles. Apparently they’re going to organise posting stuff out to the people who missed out.

I wasn’t too bothered, but then it was my fifth 10K, and my eleventh organised race. And I can see why, as a race organiser, you wouldn’t want to have a big surplus of chunks of enamelled metal left over when an inevitable percentage of runners don’t turn up on the day. (Plus, I’m not thin. Race souvenir T‑shirts are normally designed with the more typical runner’s shape in mind, so even when I can squeeze into them they certainly aren’t flattering. Mine normally get saved for decorating in, rather than proudly wearing outdoors.)

On the other hand, it’s mostly the first-timers and the charity runners who come in last. I crossed the line with a very weary bloke who’d just run his first ever 10K, only to find something of a wasteland where he was expecting a cheery volunteer to drape a medal over his head and to pick up a bottle of water. And there were hundreds of people behind us.

While they’ll send out medals in the post, apparently nearly 400 people missed out on the chance of that just-finished photo in the Runners’ Village, medal around their neck and a backdrop of other happy runners. Seems like a real shame.

Anyway. In lieu of my normal finishing photo with the medal, here’s a snap from the start. See you soon! Think I might sign up for the Bristol Half to make sure I keep my training going… 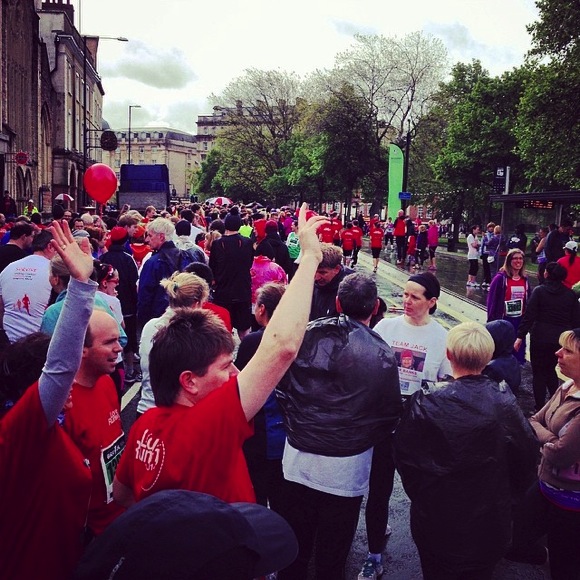