I’m getting better at getting back to running. I normally take a week or two off after a big event-type race; this time, after the Bristol 10K, it’s been more like a month. But I’m okay with that, and I knew it was likely. I spent a week and a bit in Crete (though I did a 10K walk with my Dad while I was there, at least), then had to finish off the last couple of weeks of a contract in an office 9–5 job on top of my normal freelance work. The weather hasn’t exactly helped, either…

But, this week I’ve had no excuses, so I headed out for a trivial 3K down the towpath to get back into the running habit. I’ve found it’s always good to re-start with a tiny run, because you want the minimum psychological barrier possible between you and the running habit.

Today I was helped out of the door by the sunshine, and snapped this picture of the Suspension Bridge on my phone on the way past, to help remind myself why running in Bristol is such a lovely pastime.

Anyway. To keep re-building the running habit, I think I’m going to try getting out at least twice this week (I’d say three times, but there’s a vague plan to go and watch the summer solstice at Glastonbury Tor, which might leave me with less room in my schedule.) Then next week I’ll try for three, including a long one. And we’ll see how I do.

Enjoy the sunshine, if you’ve got it! 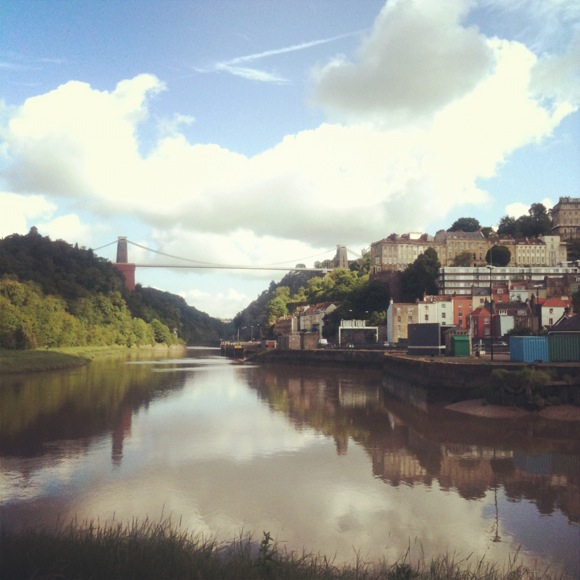 One of the problems I’ve faced while trying to get back into the habit of running three times a week is a lack of that mental itch that says “you’ve not been running recently, you know.” It hasn’t helped that this is a busy week, as I prepare for a return to an office job on a ten-week contract, starting on Monday.

But what the heck. The rain had lightened up, the Portway has good street lights, and I still had a couple of hours before bedtime. I went anyway, for a quick 5K down the road and back, and it was fine. I even took time to stretch properly at the end.

Hopefully I’ll get out on Sunday to keep up my three-times-a-week momentum, though the weekend’s looking scarily busy so far. So, I went to Crete for a week, and then took another week off jogging. Still, I hit the road again today, and I’m glad I did. I hadn’t planned on a morning run today, but it was a lovely morning, and I just felt the urge to be out there in the sunshine.

I did a plodding 5K down the towpath on the south of the Avon. Great weather, lovely clouds in the sky — as you can see from this picture that I snapped on the return leg — and despite my recent lack of training, I didn’t feel too bad.

All in all, a good jog. Shame RunKeeper crashed between kilometres 1 and 2, but I was using the Garmin Forerunner as a backup, so I still managed to get a decent log.

Hopefully I can start ramping back up to at least a couple of runs a week now.

Since my last angst-filled posts, I have managed to get out a couple of times, but I’m not back even to twice-a-week running yet.

Still. On the plus side, last Sunday I got out for a 10K run through Leigh Woods, albeit with a bit of a walking break on the steep bits. This weekend I was away visiting friends in Wales, but managed to fit in a 5K hike up a very steep hill, which should have been good for the calories. And tonight I wandered off down the towpath for 5K and back.

I’m afraid I can present no evidence here, as RunKeeper’s site is currently down due to a power outage, so instead here’s a snap of the Suspension Bridge I took on the way back.

Not long to go now to the half marathon, and I’m still feeling rather worried about it. But hey, at least I’ve done a long run now — that 10K’s further than I’ve been for months. 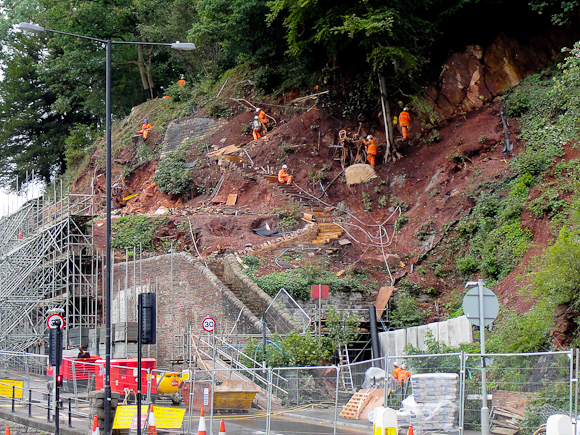 After my last somewhat dispiriting post, some good news. I’ve been making an effort to get back into the habit. I’ve not suddenly turned into the kind of jogging ninja I was fantasising about back then (shame, as The Jogging Ninja would be a good name for a blog) but I have at least got out there and got running. Thanks to everyone here and on Twitter for the words of encouragement and advice.

My plan does seem to be working, though it’s not all been that joyful. First of all I convinced myself to get out of the door by going for a tiny 3K jog. That at least got me back on the street, though it actually felt quite tough. Then I tried to make sure I went for at least one run within the next seven days, and got out for a slightly longer run. Though I’m not sure how much longer, because RunKeeper stuffed up, and completely lost its GPS fix about halfway through. Grr. And that run didn’t feel that great, either, and I even slowed to a walk in a couple of places because I didn’t really feel like I had much stamina.

On both of those runs, I felt tired, and quite achey, especially in the left hip.

But, third time’s the charm, and all, and today I got out and the running was much better. I went out thinking I’d do 5K, but was feeling so good halfway through that I pushed on and made it six. It felt like I could easily have done more, but I don’t want to push it too hard and put myself off by being too sore tomorrow. I think this is probably down to getting more sleep and being careful with what I’ve eaten for the last few days — more energy. Also, it being a weekend run rather than midweek probably helped.

Today’s jog was pleasant, I didn’t ache, and it was just what I needed to help me back into the habit. I even passed a whole bunch of construction workers rebuilding bits of Bridge Valley Road, which gave me a useful title for this post 🙂

So, I’m getting back into it, albeit slowly. Going to try to get out for a mid-week 5K on Wednesday to keep up the momentum…